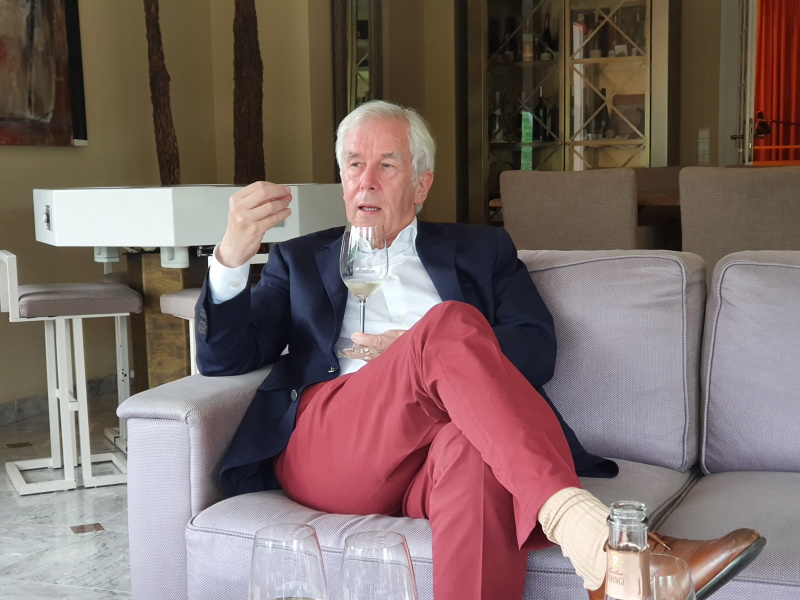 During my stay in Luxembourg to take part in the Concours Mondial de Bruxelles, I took a jump to the Caves Saint Martin, in Remich. However acquired mostly by the Gales family in the 1980s, these cellars are a reference in wine production located on the banks of the Mosel River.

Free time is scarce. But, taking advantage of the ride of a Dutch friend who was going to visit the Caves of Saint Martin, I did not hesitate. These cellars are a reference in the production of quiet and sparkling wines in Luxembourg. The idea was to visit the space, taste two or three wines and leave there to still go to dinner with the other colleagues and tasters of the Concours Mondial de Bruxelles (CMB). That was what would have happened if we hadn't been seduced by the friendliness of Marc Gales, a gentleman to welcome and an excellent wine producer, a third generation representative in the company.

The origin of The Gales Cellars dates back to 20 April 1916, when Nicolas Gales, the son of an oenologist, laid the foundations for a company that eventually became one of the leading wine producers in Bech-Kleinmacher, on the banks of the Mosel. In the aftermath of World War II, his two sons Georges and Jules Gales, as well as their youngest daughter, Betty Gales, came to support their father during this period of economic reconstruction. A complicated time won by the strength and character of this wine-producing family.

Over the years, there has never been a breach of succession but rather the presence of generations who have always come together for the benefit of the company, combining experience and learning in its unchanging desire to ensure the sustainability of family traditions. Based on this legacy, the third generation represented by Marc Gales joined the company in the early 1980s to expand the business. The big step was taken in 1985, through the majority acquisition of Caves St Martin in Remich, which allowed them to expand the company's portfolio. In 2002, another important step was taken with the inauguration of a new unit for the production of Luxembourg crémants in Ellange Gare. The fourth generation, represented by their children Isabelle and Georges Gales, are now working alongside their father Marc Gales, now the president of the company, to consolidate the work done by previous generations and to prepare society for the challenges of the future.

After the presentations, we have now become the focus for the Saint Martin cellars. Founded in 1919 in Remich, it is also a reference winery in the region, having been the first to promote the sale of its wines through wine tourism activities on the property. Its barrels, bottles and stainless steel tanks lie in the semi-darkness of the underground passages that have been laboriously excavated on the limestone cliffs of the banks of the Mosel. In Luxembourg, fans of the traditional method of producing sparkling wine in Champagne will find it difficult to find a more interesting place to learn the details of the process if they do not go to the Cellars Saint Martin. It is therefore a must-visit. It's worth knowing but it is recommended that visitors take warm, because the tunnels maintain a constant temperature of 12 degrees along their entire kilometer of extension. The visit ends pleasantly with a tasting of crémants and other wines of the company.

Proving it with Marc Gales was a privilege. Because in addition to your company, we tasted not these two or three wines, but eight! Three crémant (sparkling wines), four white wines and a late harvest. This is because, each time Marc was asked about the wines he brought to the table, his curious eyes revealed that he needed to show even more to explain the reality and diversity of the company. Always with that passion of those who dedicate themselves to wine and the desire to transmit their knowledge. Every time Marc got up, and I thought the tasting was over, the more wine he brought. Moments that passed at a glance. Not surprising: when the conversation is good and the wines too, time passes quickly.

Cremant G by Gales stood out for the wines tasted. It is an excellent sparkling wine, with base wines from the 2013 harvest, fermented in small stainless steel vats with a high percentage of reserve wines, vinified in barrels and aged in bottle with lees under pressure, for seven years. Of thin and persistent bubble, it has an intense aroma and on the palate an expressive structure. It is fresh and elegant, with delicate but persistent finish. Another cremant I liked was the Gales Heritage rosé, drawn up 100% with the Pinot Noir variety. In the aroma is very delicate, with fruity notes, profile that also assumes in the elegant palate and with good persistence. Even his 'brother' Wales Heritage, in the white version, presents a great balance and delicacy, all of which are wines of excellent value for money. These crémants come from the best slopes around the city of Remich. His philosophy is based on respect for the soil, the vineyard and its grapes. The low yields of the vines reveal the complexity of the aromas of each grape variety.

The tasting also continued with the welsh white wines Auxerrois and Gales Pinot Gris, both Grand Premier Cru, from the 2019 harvest. Both Auxerrois and Pinot Gris are grapes from Alsace (France), but are also planted in other countries, including Luxembourg, where we often find wines produced with these varieties. Although both showed great balance, I really liked auxerrois. After partial desengaço, it was fermented at a controlled temperature of 17°C and aged in stainless steel deposits of 31 hectoliters. A fruity wine where the aroma of white plum and spice notes stand out. On the palate reveals the character of the grape variety, fruit balanced with some minerality, elegance and freshness.

Two other white wines arrived at the table, this time from the Domaine & Tradition line, made with pinot blanc (2018) and riesling (2019) varieties. Pinot Blanc grapes were picked by hand and partially disengaged, fermenting at a controlled temperature of 16 °C. It then aged partially in small stainless steel vats and oak barrels. A wine with aroma of ripe fruit and some dry fruit, fruity and floral on the palate, wood well integrated and good finish. His companion Riesling had the same type of winemaking, except for the wood stage. Aged in small stainless steel vats. Fruity and mineral on the palate, continued with the same profile in the tasting, but with a lively and impressive acidity. A wine that can now be enjoyed with the right food, but which will only be won if it is stored and consumed in a few years. Anyone who's fond of aged Riesling knows what I'm talking about.The wine tasting ended with a surprise, a Late Harvest Wales Gewürztraminer 2018, which was outsof originality but above all by the balance of sweetness and acidity. A tasting that ended in beauty, not only for the wines we tasted but also for the privileged presentation we had.

Viticulture by the Mosel River has a long tradition. In the year 370 D.C. there are Roman records describing the highest land on the slopes of the banks of the Mosel as the best for the vineyard, while the valleys of the rivers were used for planting other agricultural products. In the Middle Ages, monks continued to expand the culture of viticulture. Later, with the harsh winter of 1709, the planting of vineyards fell dramatically. Only the vineyards located in the mildest river plains have been preserved.

Already in the 20th century, other problems arose. The destruction of the vineyards by the phylloxera, the two world wars and the convulsions of the market forced producers to adapt to the circumstances. This has led to a fundamental change in the range of varieties, marketing channels and the concept of quality. Finally, in the mid-1970s, a significant wine revolution took place. The traditional barrels and wooden toneis gave way in the cellars to modern stainless steel tanks to give the wines greater freshness. Counseling and training have become increasingly professional, which has had a major impact on the style of wines produced. New winemaking techniques also served for the emergence of new wines, with different varieties. As a result, new wines of various styles emerged, such as the Crémant de Luxembourg.

Today, luxembourg's wine region extends for 42 kilometres between the villages of Schengen and Wasserbillig, on the banks of the Mosel River, which borders Germany. The vineyards are located on the slopes, some of them ingremes and rugged, at a height between 150 and 250 meters above sea level. Although red wines are also produced, Luxembourg is best known for producing good quality white and sparkling wines. And there are also some more recent special wines, such as Vendange tardive (late harvest, made with ripe grapes, mostly with botrytis), Vin de paille (straw wine, made with grapes dried on straw mats for about two months) or Vin de glace (ice wine, made with naturally frozen grapes), whose production has been approved since January 2001.

The Designation of Origin in Luxembourg

The Name 'AOP - Moselle Luxembourgeoise' certifies the quality based on the geographical origin of the product. To use this name the geographical area must be accurately indicated, rules that must be followed to define both the quality standard and the yield per hectare. Its wines are:

Lieu-Dit (Terroir Wines) - These wines come from the best vineyards of luxembourg's Mosel, precisely delimited. Here the quality of a wine is determined according to the terroir, the origin. The vineyard, low yields, selective harvesting and natural cultivation are just some of the criteria for the outstanding quality of these wines.

Côtes de (Incoming harmonious wines) - They are harmonious entry wines of high level. Fruity and light wines for an uncomplicated daily enjoyment. The yield limit for all grape varieties is a maximum of 100 hectolitres per hectare; in Elbling and Rivaner is 115 hectoliters per hectare.

Despite its high quality, one of the reasons for the country's lack of visibility in wine terms is simply because its inhabitants, a majority of the unobstructed population, consume most of the quality production.